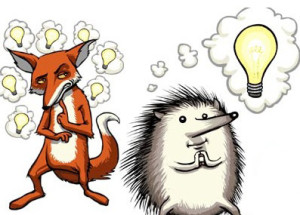 My last attempt at getting through The Brothers Karamazov was on a transatlantic flight. I made it my usual hundred or so pages through the book before abandoning it to the mindless numbing of the in-flight entertainment system. As I later picked at whatever inedabilities were served the gentleman to my right struck up conversation. He assumed (rightly) that by the presence of novel I must be British (much to annoyance of non-reading American wife), and comforted me with his inability to also come to grips with Dostoevsky, despite being a tenured professor of English literature. Apparently those like myself, who are able race through Tolstoy struggle with Dostoevsky and vice versa.

Isiah Berlin in his famous essay compared these behemoths of Russian literature. Drawing on fragments from the ancient Greek poet Archilochus he quotes the line “‘the fox knows many things, but the hedgehog knows one big thing”. The fox for all its many cunning ways is defeated by the one defense the hedgehog makes [1]. For Berlin:

…there exists a great chasm between those, on one side, who relate everything to a single central vision, one system, less or more coherent or articulate, in terms of which they understand, think and feel – a single, universal, organising principle in terms of which alone all that they are and say has significance [the hedgehogs] – and, on the other side, those who pursue many ends, often unrelated and even contradictory, connected,if at all, only in some de facto way, for some psychological or physiological cause, related to no moral or aesthetic principle [the foxes]. These last lead lives, perform acts and entertain ideas that are centrifugal rather than centripetal; their thought is scattered or diffused, moving on many levels, seizing upon the essence of a vast variety of experiences and objects for what they are in themselves, without, consciously or unconsciously, seeking to fit them into, or exclude them from, any one unchanging, all-embracing, sometimes self-contradictory and incomplete, at times fanatical, unitary inner vision. The first kind of intellectual and artistic personality belongs to the hedgehogs, the second to the foxes; and without insisting on a rigid classification, we may, without too much fear of contradiction, say that, in this sense, Dante belongs to the first category, Shakespeare to the second; Plato, Lucretius, Pascal, Hegel, Dostoevsky, Nietzsche, Ibsen, Proust are, in varying degrees, hedgehogs; Herodotus, Aristotle, Montaigne, Erasmus, Molière, Goethe, Pushkin, Balzac, Joyce are foxes [1].

For Berlin Tolstoy was the fox and Dostoevsky the hedgehog. I entered medical school hoping to become a surgeon and whilst the idea of surgery certainly appeals, its day to day tedium, the endlessly perfecting of feats of dexterity and uniformity of vision* made me entirely unsuited. Most GPs I suspect tend towards being foxes and our hospital colleagues hedgehogs. No doubt that is a great simplification but I do much prefer authors that Berlin lists as foxes to those he lists as hedgehogs. It may be interesting to see if my hospital colleagues had a different set of preferences.

* I of course take creative liberties with the field of surgery

References
The Hedgehog and the Fox, Isiah Berlin, URL: http://press.princeton.edu/chapters/s9981.pdf