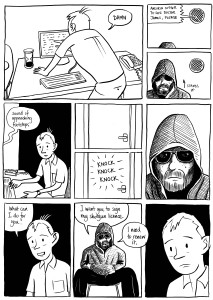 A Page From A Bad Doctor

There was a time when I scorned graphic novels. I’m not entirely sure why but pretentious literary ambitions may have played a part. My conversion began with Maus, the fantastically drawn novel of The Camps and Nazi Germany. From there I discovered the impressively bearded Alan Moore and the wonderful samurai rabbit who goes by the name of Usagi Yojimbo.

Ian Williams’ graphic novel details an episode in the life on Dr Iwan James, how he deals with his OCD daemons, his chaste infatuation with his colleague and his interactions with his patients. It provides a worryingly accurate monologue of how doctors think and how many cope with their OCD (sometimes known as doctor’s disease due its frequent manifestation in those in medicine) 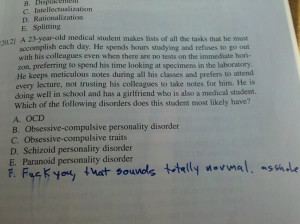 The comic art is well drawn and the OCD sequences are especially good. One does wish there could have been more done with the art though, most is simply straight forward representations of day to day life. Nevertheless The Bad Doctor is an excellent graphic novel and a great introduction to the genre in case there are any reading who still have pretensions as to its validity as a form of literature.