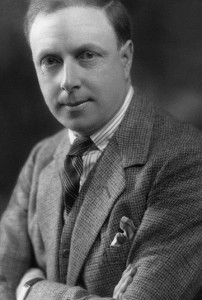 A J Cronin – Author of the Citadel

If To Kill A Mocking Bird is responsible for creating armies of lawyers than this should have been the book responsible for creating an army of doctors (so far I’ve only ever seen Giorgio Armani being inspired into medicine by it and even then he changed career and gained prominence in a field far removed from medicine [1]). The Citadel is admittedly much less of a work of literature than Harper Lee’s classic yet is no less inspiring. Cronin served on the same health board as Nye Bevan and it was the reforms that were carried in Tredegar that paved the way for the modern NHS. Indeed according to a 1938 poll The Citadel was voted to be the second most important book in the country (after the bible) [2]. Cronin talking about the activities of the health board in is his autobiography states:

“In actual fact this scheme can definitely be regarded as the foundation of the plan of socialised medicine which was eventually adopted by Great Britain. Aneurin Bevan, the Minister of Health, who was mainly responsible for the national project, was at one time a miner at Tredegar, and here, under the local aid organisation, the value of prompt and gratuitous treatment for the worker was strongly impressed upon him [3]”

I came to The Citadel too late for it to inspire me into medicine but it certainly helped me stop giving up when bogged down under biochemistry and incomprehensible studies of pharmacokinetics. The book draws upon Cronin’s own experiences (many of the medical experiences are lifted straight out of his biography Adventures in Two Worlds) and tell of a young doctor, Andrew Manson, brought to a Welsh mining village. He slowly establishes himself as general practitioner in the village and befriends another junior doctor by the name of Denny. This being the pre-penicillin era Cronin’s description of medicine is wonderful to behold. Appendectomy on the kitchen table followed by the blowing up of the sewage works when the public health officer refuses to take responsibility for the typhoid epidemic. Cronin, as in his other great creation Dr Finlay, paints a picturesque vision of rural general practice in the bleakest of environments. One wonders what it would have been like to practice in such times, Cronin paints an interesting picture of Dr Thoroughgood, a hardworking but outdated (even for the time) physician:

“But in treatment, his tidy mind resented the intrusion of the new. He would have nothing to do with tuberculin, holding that its therapeutic value was still completely unproved. He was chary of using pneumothorax and his percentage of inductions was the lowest in the hospital. He was, however, extremely liberal in the matter of cod-liver oil and malt. He prescribed it for all his patients. [4]”

Andrew starts as young sermonising doctor who rails against the injustices of the inequality and the sub-standard care given to those without money. As his career progresses however see the ugly side of medicine and money mixing. From the corruption at the local health board to when Andrew becomes a prominent practitioner in London mixing with the Harley Street elite. Instead of treating men down the mines he ends up treating wealthy ladies with imaginary complaints with little more than extortionately priced water. In in a heated exchange with his wife (from which the title of the novel is derived) Andrew is scolded for:

“…falling victim to the very system you used to run down, the thing you used to hate…Don’t you remember how you used to speak of life, that it was an attack on the unknown, as an assault uphill-as though you had to take on some castle [citadel] you knew was there, but couldn’t see… [4]”

At the time of publication there was uproar from the Harley Street doctors that felt attacked by Cronin’s novel (Victor Gollancz his socialist publisher was particularly good at stoking up controversy). When interviewed by The Daily Express Cronin stated:

“I have written in The Citadel all I feel about the medical profession, its injustices, its hide-bound unscientific stubbornness, its humbug … The horrors and iniquities detailed in the story I have personally witnessed. This is not an attack against individuals, but against a system [5]”

The criticisms were not just from the grandees of the medical establishment took issue with the way in which Cronin described their Harley Street practices. Leonora Eyles writing in the Times Literary Supplement also made the accusation that Cronin has tarred the entire medical profession with one brush:

“All over the country today are county and municipal officers who care less for fees than for healing; in general practice are insignificant men and women living devoted, anxious lives with only fourteen days a year away from the clamorous telephone by day and night. In Harley Street are men who might stand by Lister without shame [6]”

The Citadel was likely to have been important in gaining wide spread acceptance for the idea of a socialised health care system. It no longer grips the national consciousness as it once did and seems almost forgotten by doctors today, only at times resurfacing in the odd journal article or in the recent Fabian society pamphlet written by former Labour MP Dr Howard Stoate entitled Challenging the Citadel and borrowing a quote from Manson in its preface [7]:

“Structurally we’re static. We never think of advancing, altering our system. We say we’ll do things and we don’t [4]”

The Citadel is one of the finest books written on medical life, whilst eminently readable it is regrettably not a literary classic. It gives insight into the world before the NHS and serves also as a call to arms of why we need to keep fighting for the NHS. It is a book I return to when I feel at my most cynical about medicine and it never fails to inspire.

For a detailed analysis on how The Citadel contributed to the creation of the NHS I highly recommended the following fine article “AJ Cronin and The Citadel: did a work of fiction contribute to the foundation of the NHS? S O’Mahony, Journal of the Royal College of Physicians of Edinburgh 2012; 42:172–8“

[6] AJ Cronin and The Citadel: did a work of fiction contribute to the foundation of the NHS? S O’Mahony, Journal of the Royal College of Physicians of Edinburgh 2012; 42:172–8